Cost Per Hour (CPH)- Time Based Programmatic Ad Buying – Advertisement industry have evolved drastically, with each new Advertiser demand there new technology needs we are seeing.

First it when advertiser wants to move to digital and count everything that is serving on to their potential customer. Which leads to CPM Cost Per Miles Model of Ad buying and sales.

At the same time some of the advertiser demand to track the the lead,conversion,clicks etc. Advertisers reach a large number of people. Advertiser are interested in brand awareness over the immediate sale which leads to Cost per Lead (CPL) and Cost per Acquisition (CPA) and Cost Per Click (CPC).

With too much bot traffic and fraudulent clicks coming from the publishers which we are still causing problems for Advertisers and Ad Networks.

Advertiser demand to work with Viewable impressions where For Display, 50% + pixel and for 1 second (2 seconds for video) is counted as a viewable impression. We went on to create Viewable Impression Based Ad buying. Which is still hard to meet as per Advertiser’s requirement.

Which is still hard to match with Media Agency such as GroupM demanding 100% Viewable Impression considered to valid and are billed.

With all this, Main question we are yet to answer,

Viewability and Exposure time for any ad that is serving, Considering the standard as 1 second and n% as a criteria for viewbable impression. But Does it assure that Ad have good Exposure time and Advertisement convey what it is meant for

Viewability and Exposure time for an ad that is serving, Considering the standard as 1 second and n% as a criterion for the viewable impression. But Does it assure that Ad has good Exposure time and Advertisement convey what it is meant for? Check out the Video which can explain the above points (Courtesy Elium  )

So What Is Cost Per Hour/Minute/Seconds (CPH)?

Instead of measuring the just “x Seconds” and “X” Pixels of the ad to count it as a viewable impression. In this approach, We will calculate the total time spend by the User to view the ad and Portion of the ad in the in view. The advertiser has to pay based on the number of seconds/Hour/Minutes User viewed the ads. Recently New-York Time has effectively implemented this approach to give ROI to Advertiser. Check out the below cost per hour comparison with CPM 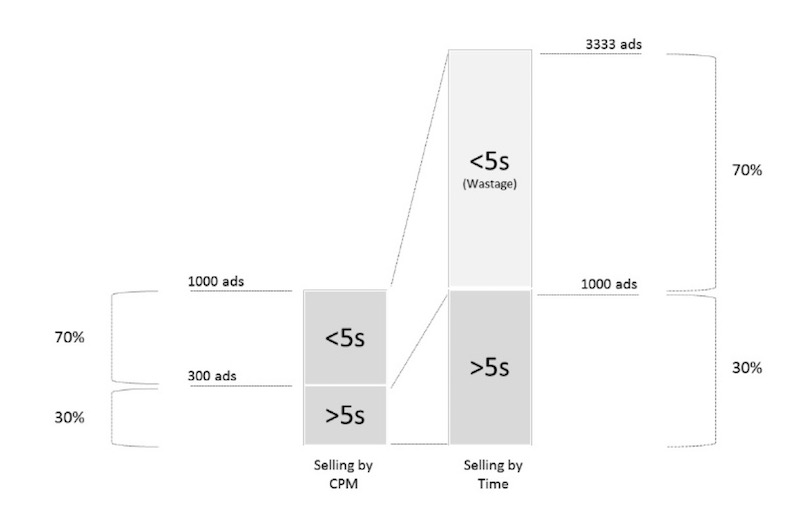