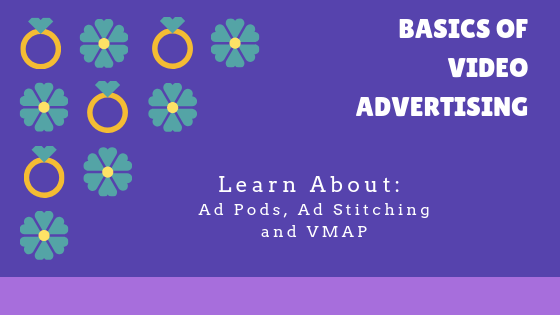 Back in the time, every publisher, video player tech providers, advertisers (everyone) used their own techs and there was no uniformity or standards being followed. For an advertiser to run a video ad campaign, it was challenging. They had to generate multiple video ad creatives considering for various player technologies and multiple environments (Mobile/Desktop) where the players were used. i.e. one creative that should be compatible with JW player on mobile environment, creative #2 for XYZ player on mobile web environment and Creative#3 for XYZ player on Desktop environment and so on. Which is why IAB had to come up with guidelines that a publisher, advertiser and tech companies can follow to reduce their efforts and increase efficiency.

A video ad that plays during a video content playback is called a linear ad. it is while a content is being consumed or watched by a user and the video ad is pushed be shown either before the content or during the content or after the content has ended, which commonly termed as pre-roll, mid-roll, post-rolls.

> Linear ads can be further classified as instream and outstream.

What are Instream Video Ads

Instream video adverts are those videos which are streamed before during or at the end of a video a viewer is already viewing. This means that the audience is already captive and receptive to video material.

When the video content player detects an ad break/ad slot, an ad request is generated from the environment created by the video player within the user’s browser. (HTML5/Java script in most cases).
Please note that a Pre/Mid/Post roll does not necessarily have to be a video ad, it can also be a banner display ad or a rich media ad.

The pre-roll/ midroll and post-roll are the ad positioning which help us define when and where exactly the video ad will load i.e. before the content rolls (pre-roll), while the content rolls (Midroll) or at the end when content has completed rolling (post roll)

Instream ads are vulnerable to ad blocking since the ad request are generated from player within the browser.

Usually a banner ad (300×250, 728×90) that belong to the instream video ad (pre-roll/midroll/post-roll) being delivered in the video player. The companion ad tends to remain on the page for indefinite time. The goal behind delivering a companion display banner ad alongside video ad is to leave a long-lasting impact on the user even when the video ad has ended. In other words, it helps delivers continued presence of the brand even after a video ad for that brand has ends

What are Outstream Video Ads

These are video ads that are located before (pre-roll), during (mid-roll), or after (post-roll) the publisher’s video content.

Outstream ad can be defined as ads that does not necessarily require video content to deliver while the ad delivers. You see such ads in non-video environments like social feeds, text-based editorial content, etc.
Outstream ads leverages the other factors on the publisher’s page, like its content and context.
(Native video ads. In-banner videos (IBV), In-content, In-read, In-article, Sliders, Corner unit, floating unit are also considered as outstream ads.)

The benefit of opting for outstream units is that it is less intrusive i.e. it is not blocking users view. User can either skip or close the video player/ad and it only plays when in-view, which is a beneficial with advertisers’ perspective.
Ideal for who? For small to medium scale publishers that cannot afford to have their own video content but are still willing to get paid higher eCPM by delivering video ads usually opt for such units where the video player technology and demand(video ads) is all provided by 3rd party companies while there is just the inventory coming from the publisher

Overlay images on the video content are considered as Non-linear ads, similarly an over delivering video ad can also be categorized as Non-linear video ad. The transparent banners of 728×90 you see on YouTube are one of the best examples of the same.

An ad that does not necessarily require pausing or interrupting of the content/video content is what we can call a non-linear ad.

A non-linear ad can be in any format. It can be either text, images, RM or video.

This can also be termed as “Video ad standard” defined by the Interactive Advertising Bureau.
This is set of technical specifications (i.e. VMAP) along with Protocols (VAST) and interface (VPAID) that is designed to supports interoperability in video advertising which help serving of video ads, across different publishers, devices and platforms, environments easy.
To put it in a way – VMAP defines “when and where” an ad break should be inserted whereas, VAST and VPAID works on “How” the ads will deliver.i.e. the delivery technicalities of the video ad.

When VMAP defines the roll type, VAST helps deliver it. A universal protocol for serving video ads in streaming video content, permitting ad servers to use a single ad response format across multiple environment and devices.

It is just a set of command that is being followed by both – player and the ad creative, that helps deliver the ad.

What a player built on VAST specification really does is gives instructions on how to handle VAST ads.
It tells your video player what the ad should do? how it should show up in the player? how long it should display? whether or not it is skippable? where to fetch the ad from (i.e. the ad server)? and what the click-thru url should be. once ad loads there is nothing much you can do about it or control or modify it in runtime.

For VAST, as soon as the video ad is rendered in the player on the user’s browser, the connection of the browser with the ad server is lost. Since, VAST does not require constant communication from ad server. Any tracking of the progress or performance is carried out by the pixles and Event trackers.

VAST in its protocol helps define:

You Can check Exact difference between All Version in another article, Read More

(is an Interface specification) its technically an API.
Video player ad unit definition is a VAST for interactive ads. Like the full form says, it is a interface that helps an ad and the video player built with different technical specification to communicate and deliver seamlessly user experience.
VPAID helps speaks the common language for the video player and video ad to be rendered. unlike VAST which is ridged and only works on predefined XML syntax.
It’s a common protocol that every video player as well video ad follows that wants the ad to interact with player in real time. Take instruction from the end user in run time i.e. when the video ad is being played.

While the VPAID ad is being served, the player and the ad unit are in constant communication since that is the only way a user can give input or submit response on the video ad being delivered on the player. To be precise the event listeners are part of the video ad which why the video ad can take instruction in real time. we can see that in the video example below. For an ad to be interactive, there is a need of uninterrupted communication between the player + video ad + video ad-server.

Any/All activities that needs to be tracked in a VPAID ad format may or may not be done using pixels/event trackers since VPAID also allows tracking while the video ad was being delivered. VPAID is capable of doing this all since VPAID ads are in constant connection with the ad-server.
VPAID is also capable of cookie dropping, In-view measurement.

What is AD PODS ?

Ad-pod is another liner ad offering from IAB that allows sequential delivering of a bunch of ads back to back.

When there is ad break defined for 60 seconds, instead of delivering one ad with length of 120 seconds, an Ad pod allows you to deliver two 30 seconds ads or it could be four 15 seconds ads.

Ad-pods are supported on VAST version 3.0 and above.

You have surely experienced ads coming smoothly and running seamlessly on your television. With Ad-pods, IAB is trying to achieve the same.

When in an ad-pod, a predefined bunch of ads deliver in sequence and only then it goes back to actual content once all ads have been delivered. you can find a skip option as well, but it won’t skip to the content directly, but it skips to next ad in the sequence. Even for ad-pods, VMAP is used for defining the ad break definition, triggering and/or initiation. i.e. when to place a pre-roll ad-pods then midroll ad-pod and post roll ad-pod.

It is the process of inserting an ad into the video content stream in real time.
Imagine a Youtube video playing. You see the content running and when ad break is reached, the player sends out an http ad request and receives an http ad response and the ad is delivered.

To avoid ads interference, you start using a ad blocker in your browser. Which blocks the outgoing Http request or incoming Http ad response. When this happens, the publisher is losing on opportunity to monetize its impressions and the advertiser looses out a chance to showcase its ad to suitable user.
To avoid such scenarios, Ad stitching was introduced. It is a mechanism that allows insertion of the video ads in the content stream.

So ideally there is just one single content stream delivering content as well as video ads seamlessly. Also, since the ads are inserted inside the stream, there is no ad request generated from the player on the user’s browser, hence this is the most efficient way to overcome ad blocking.

CMS – Content management system is where we can stitch the video contents and video ads in a predefined way rather than doing it on browser level. In current scenario when a content is being delivered, wherever there is an ad break has been predefined, an ad call is generated from the end user’s browser and entire ad serving cycle takes place thereafter and the ad loads/plays. you might have experienced delays in ad load, you can clearly see or identify when an ad has loaded, right? to overcome such scenarios, ad stitching was introduced. This mechanism allows the pubs to be more dynamic in defining ad slots on the go. the serving of content and ad is in a continues linear stream of video that give it a feel of what you get on a television, seamless and smooth.
DAI or Ad stitching can be carried out using VAST 4.0 version only and services/companies that provide such technology are also capable of tracking all metrics at their end

A self learner with proven skills in Account Management, Ad-Operations and Business development, Client servicing, Over 5+ Years of Experience in Advertising. He is currenty working for Streamlyn Media