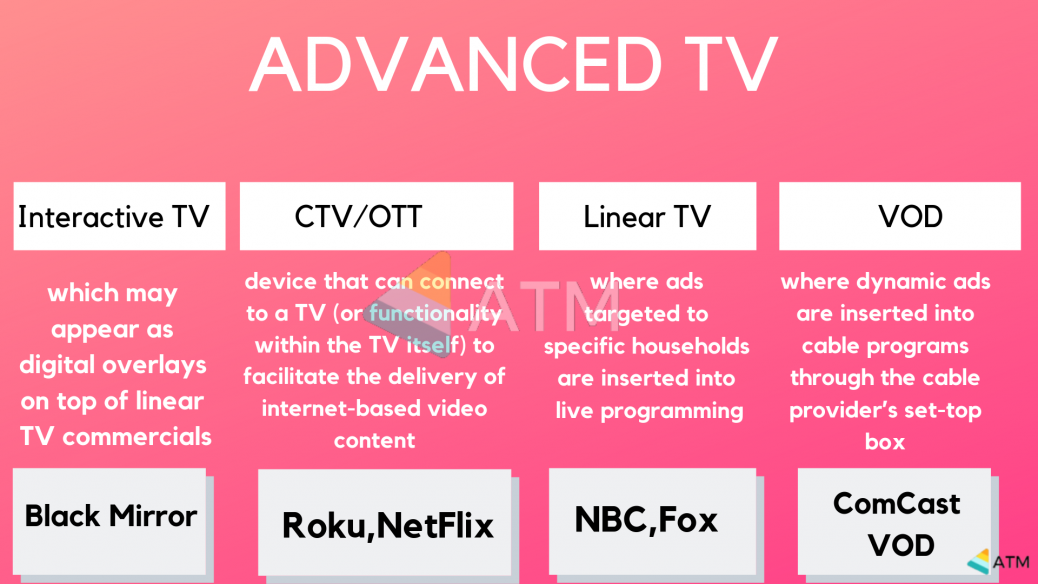 Before we jump into the OTT ecosystem, it’s important to discuss what the term OTT means.

The IAB definition is focused on the big screen, and describes OTT as a “device that can connect to a TV (or functionality within the TV itself) to facilitate the delivery of internet-based video content (i.e. streaming boxes, media streaming devices, smart TVs, and gaming consoles).

OTT aggregators: Offer a range of content from multiple providers delivered over the internet (i.e. Netflix/Hulu/Amazon prime video) without the involvement of a multi-system operator (MSO, i.e. Cox Communications/Comcast/Charter Communications). You can access this type of content without having a cable subscription.

OTT standalone services: Offers content delivered from one provider directly to the consumer over the internet without the involvement of an MSO (i.e. HBO NOW).

TV Everywhere (TVE). With TV Everywhere, content can be accessed through any internet-enabled device or mobile app with users signing in to TVE service using their subscription log in details (i.e. Watch ESPN, Fox Now).

Examples of TV everywhere apps include the following:

Connected TV (CTV): A television set that is connected to the Internet via OTT devices, Blu-ray players, streaming box or stick, and gaming consoles, or has built-in internet capabilities (i.e., a Smart TV) and is able to access a variety of long-form and short-form web-based content.

Linear Addressable: The addressable ad inserted into live programming. For example, DirecTV, Dish, and Cablevision’s inventory is all linear addressable.

VOD Addressable: The addressable ad is inserted into cable programs within the VOD content accessible through a cable provider set top box. For example, Comcast’s addressable inventory is VOD addressable.

Video on Demand (VOD): Video content that is controlled, enabled, and consumed whenever a viewer wants after its official release date or original air date and time. VOD content can be found on set top boxes, OTT devices, mobile web, mobile apps, and video streaming services.